My Week “Vacation” in Abu Dhabi—Part 1

Hello readers from near and far! I am so sorry that it has taken me so long to write you but you can only imagine that I have been so busy living it up (and working of course!) in Abu Dhabi.  I hope that you have a bit of time because this post is going to be long and also will be in multiple parts so that I can express what I have been going through the last few days.  Last Friday marked two weeks since I have been in the United Arab Emirates and so much has happened. I would suggest you get a coffee, a snack, sit back and enjoy.
When I last left you I was leaving Paris on a 10 pm flight. When I went to get on the plane I was in the 14th row.  I walked to the economy section to see that it only started at row 19. I didn't understand.  I was shocked when I finally realized that I would be sitting in BUSINESS CLASS!!!!  WTF!  I was so excited.  Never in my life have I been in any other class but economy. Etihad airways has First, Business and Economy class.  I had a super comfortable chair, my own earphones that were attached to the chair and a personal screen.  I had so much leg room that I could swim in it.  The food was fantastic; I had lamb with couscous and veggies. The service was on point and it was the best flying experience that I have ever had.  On the descent one of the flight attendants sat next to me and I explained to him that I was moving to Abu Dhabi to work. He was a young guy from Kenya and he was really nice.  I gave him my email address and he email me the next day.  He is such a sweet guy.  Turns out that he lives near the hotel that I was staying at in Abu Dhabi and he came to see me once.  He also gave me the contact info of a friend that is living near me. 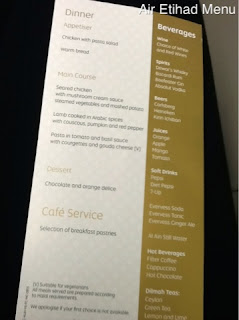 As you know I arrived in Abu Dhabi on Friday August 30th at about 8:00 in the morning.  When I got off the plane I had a lovely young lady waiting for me with my name on an iPad.  We walk through the airport and I spotted a man with a laptop bag and I quickly realized that I had forgotten my laptop in the overhead compartment on the plane. I then had to run back and get it. Thankfully it was still there.  The lady escorted me through the airport with a speed that I did not know existed.  I skipped every line, as I got my visa stamped and my eyes scanned. When I arrived at the luggage carousel my luggage was there (thank God) and I was shown the driver that would be driving me to the Crown Plaza, where I would be staying.  In the car I was accompanied by a South African woman who would also be teaching with ADEC but she has already lived in Abu Dhabi/Dubai for 5 years.  She was switching from the private sector to the public one (more money) and was now working with the ADEC (Abu Dhabi Education Council in case you forgot).
On the drive over, she explained to me about so many things about the country.  The first thing that I noticed about Abu Dhabi was how clean and it was.  This country really is the epitome of old meets new.  One hand you have the desert and all the Islamic people in traditional dress on the other hand you have amazing architecture, 60 story apartment buildings and luxurious hotels.  The next thing that I noticed is Abu Dhabi is hot.   At 8:30 in the morning it was already 31 degrees Celsius, I love it.
We arrived at the Crowne Plaza and I was given a very comfortable room. 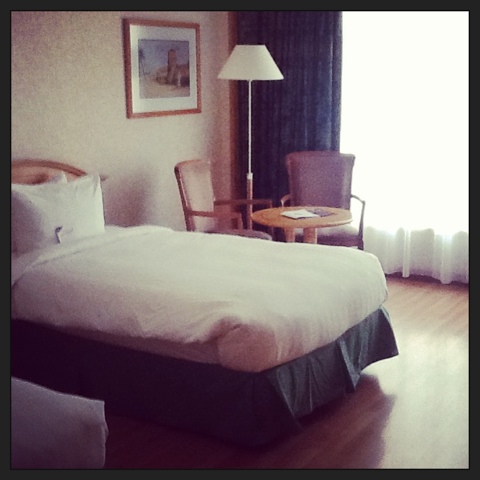 I had two double beds, free wi fi as well as free breakfast buffet every morning.  The breakfast buffet was great.  The only thing better is the buffet at the Bellagio in Vegas.  I had fresh juices to choose from in a variety of flavors including mango, pomegranate, watermelon and more.  There was an omelet station, salad bar, fruit bar, fresh coffee, bread, everything your breakfast heart desires. 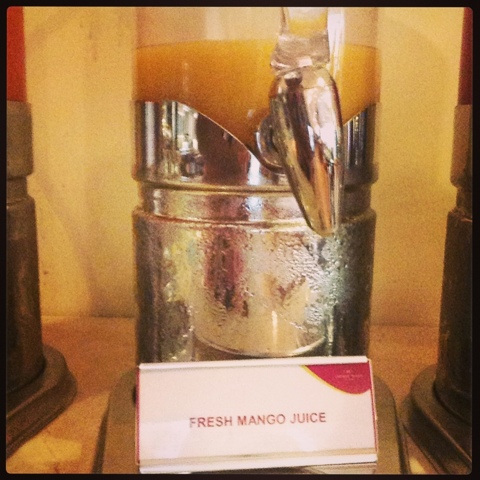 My absolute favourite thing was the smoked salmon.  All you Montrealers know how much we love our bagel and lox with cream cheese.  The bagel was missing, but they had cream cheese. Every morning I had; fresh juice (usually mango and pomegranate), smoked salmon with a bit of cream cheese, watermelon, two pieces of fried Halumi cheese and a coffee.    I went to the breakfast right away and I made my first friend Eleven.  Yes, his name is Eleven, like the number.  He is from Miami and he is this super cool, hipster type of guy. I knew that we would be fast friends.   I also met Mateo (Mat) from NYC, a super cute, tall English teacher with a deep voice that doesn't really match his looks.  I also met a beautiful Muslim Canadian girl who I connected with right away. I went to my room after breakfast changed and headed to the mall to get a SIM card so that I could have a UAE number.
I had unlocked my phone before I had arrive (for 10$ on the internet, I got an unlock code sent to me it seemed super sketch at the time but it was cheaper that the 50$ my company wanted to charge me).  We had to give up out passports to  our company to get our visas put in, so all we had was a copy of our visa and passport.  Unfortunately, Etisilat (the monopoly phone company) would only take originals so I had to go to a small company that charged me 3 times what I should have paid, but so is life.  You then have to add data (about 30$ for 1G) and minutes.  I must admit that the data, which lasts for month, it pretty good.  Anything is better than the 200MB that I had at home.  On the other hand the minutes (with are also used for texts) seem to not last as long and I have already purchased about 37$ in minutes in about 3 weeks and I have not talked a lot at all.  At the mall we ran into 2 South African teachers and they invited us back to their hotel to have a drink. They also informed us that there was going to be a pool party that night.
Before I go on I just have to tell you about the malls here. They are on crack plus steroids.  I have NEVER seen so many huge malls in life.  Anything that we have at home, we have here plus more.  Abu Dhabi has Zara, Mexx, H &M (which has plus sizes by the way), Starbucks, Tim Horton’s, Applebees and I could on and on. The prices are the same, but it actually works out cheaper for me since we have 15% tax in Quebec and there is no tax here. So even if something is the same price as at home, the no tax makes it automatically cheaper (can you say hello Iphone 5!?).For example, I got 6 items from H&M for 113$ Canadian.  On another side note the money that they use here is the Arab Emirate Dirham 1$ Canadian= 3.4 dirhams.  The malls are so clean and  bright and big. 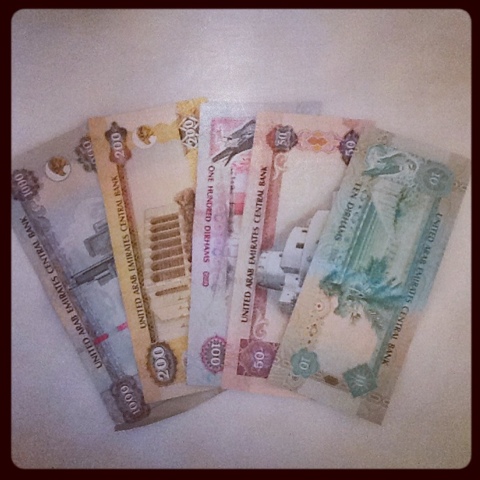 After the drinks we headed back to the hotel and we got ready pool party.  I am always down for a good party so Eleven, Mat and I decided to go.  I posted the information on FB to see if anyone else in our hotel wanted to join us and two other girls came along.  The party was at the swanky ALOFT hotel and it was free for ladies.  I wasn’t sure what to expect since sometimes when you hear the word “pool party” everyone is just  AROUND the pool and no one is actually swimming.  This was not the case.  So many people were in bathing suits and many people were in the pool.  There was a DJ and it front of the DJ booth there were sprinklers and every half an hour it would “rain”.  It really didn’t matter if you got wet, because it was so warm that you dried in about 10 minutes.
The party was a blast.  I met so many new teachers and I even had my picture taken by an online magazine.  One of the waiters took a liking to a follow Canadian girl and he gave us free drinks and food all night it was so  sweet. 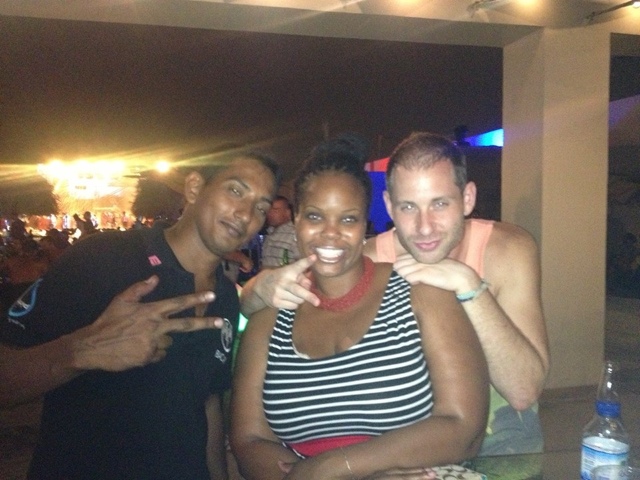 The sad thing is when the end of the night came and it was time to go home I had the equivalent of 2$ ion my wallet and I needed 10$ to get back to the hotel (p.s.  cabs are so cheap here because the gas is so cheap.  Gas is about 0.30$/L!!!) A cab ride that would have cost 35$ at home costs about 10$ here.  I had no money so I had to pull the most ghetto move.  I had to ask a guy that I HAD JUST MET at the party to lend me 20$.  I know that he was a teacher and that I was going to see him on Sunday at the Orientation for all new teachers so I would pay him back.  He said no problem and gave me the money.,  The funny thing is this guy is now my good friend and we laugh about how I had to borrow money the first time I met him.
I made it home around 4 am.  Note, I had not slept yet.

More to come!
Posted by MissHaneefa at 8:51 AM