Yesterday I did my first Color Run in Dubai, I had a fantastic time. The vibe was electric. There were over 8,500 participants from all over the world. 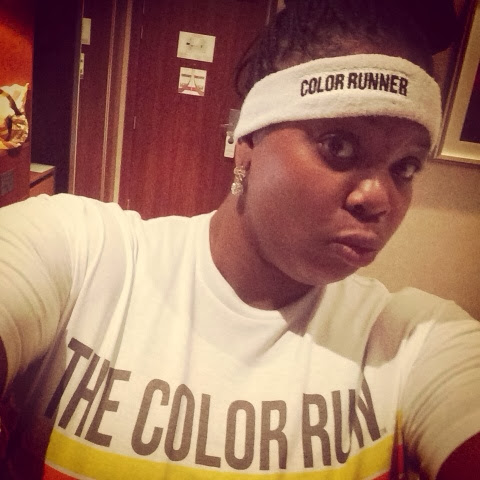 My friend and I had booked a hotel for the night, so we got up nice and early to get to the race site around 8 am (the race was starting at 9). 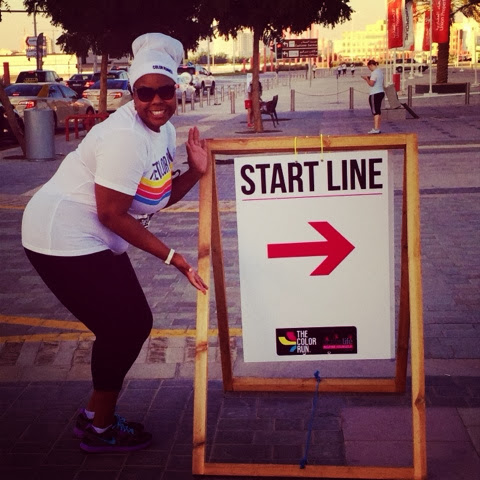 As you can see I wrapped my head in a white tank top to prevent it from getting powder in it. I know I look like a chef.
Before I continue let me tell you what the Color Run is.  The Color Run is a 5 km race that touts itself as 'the happiest 5k on earth'. Every kilometer there is colored power that is thrown at the participants. 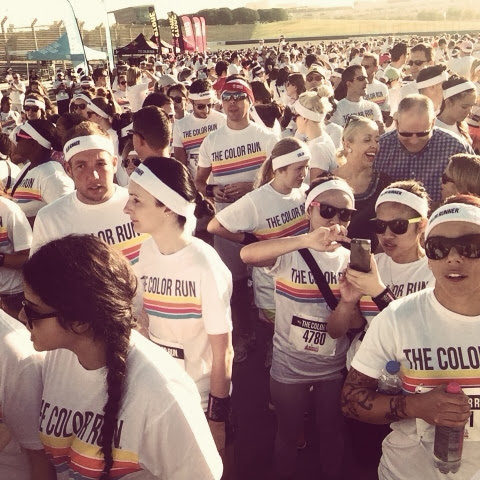 So many people at the start line. They were playing music to get us all hyped. 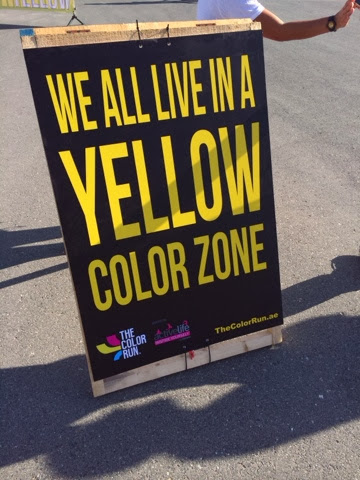 The first color was yellow. I must admit they were being a little stingy at this station. But the next station made up for it. 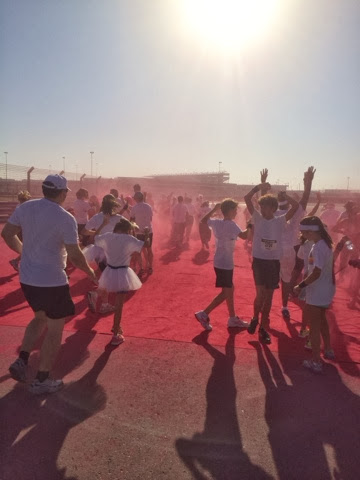 Red was great and dossed us in powder. 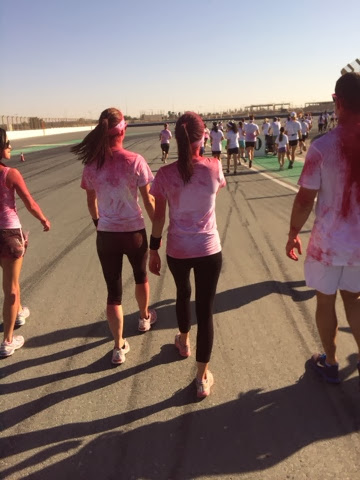 The next color was blue.  We all looked like smurfs after that station. 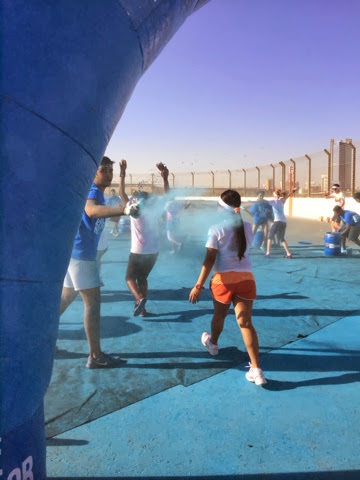 Pink was the second to last station and at this point people were rolling around in the powder. I loved that this was a family event and people brought their kids and babies. 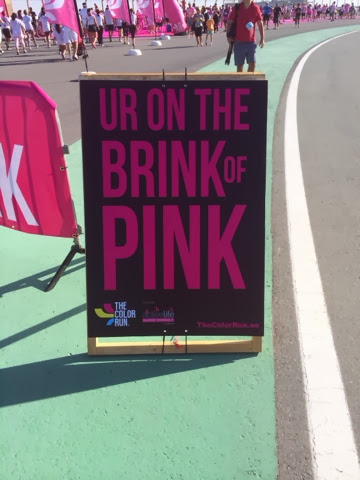 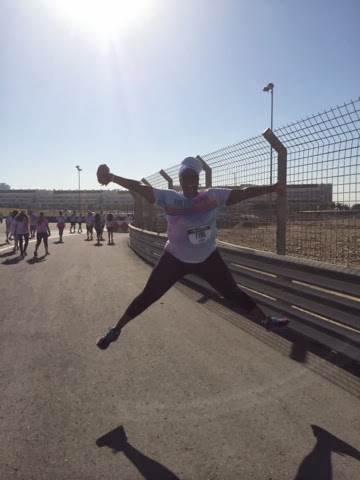 The best part of the whole race was the end. There was a huge party and they handed out extra powder packets and there was a dj and everyone was dancing and having an all around great time. 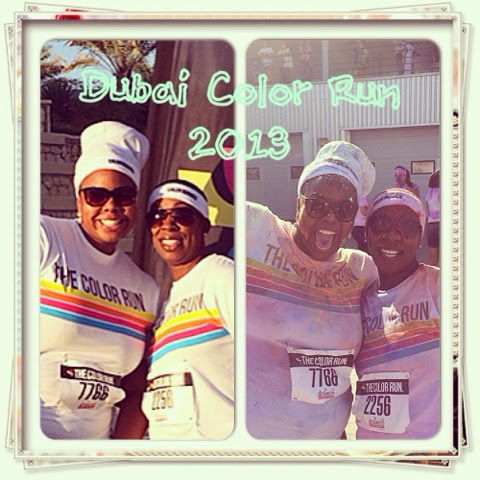 Our before and after!
If the Color Run is coming to your city I would highly recommend you participate.
Definitely want to do it again next year!
Posted by MissHaneefa at 10:59 AM 3 comments:

This morning on the way to school there was so much fog that people had to pull over and wait for it to subside. I usually do 130 km/hr going to work (trust me that is normal) but today because of the fog I had to slow down to 80.  I made it to work safe and sound.

In other news I got my first speeding ticket.  I guess I am lucky because I have some friends that have had 4 or 5 so far and I only have one.  It was for 330 dhs which is the equivalent of about 95$.  I was caught speeding on camera one day on my was home from Au Dhabi *shrugs*.

Only 7 more teaching days until our trip to South East Asia!  Woot woot!


Posted by MissHaneefa at 8:24 PM No comments:

On November 30th I celebrated three months living in the UAE! Time is flying! I was lucky to head to Abu Dhabi for an American Thanksgiving dinner at my friends place. The dinner was delicious, my friend ordered a turkey with fixings from the Hilton hotel. We all brought a few dishes and I made an apple crisp that turned out really well. 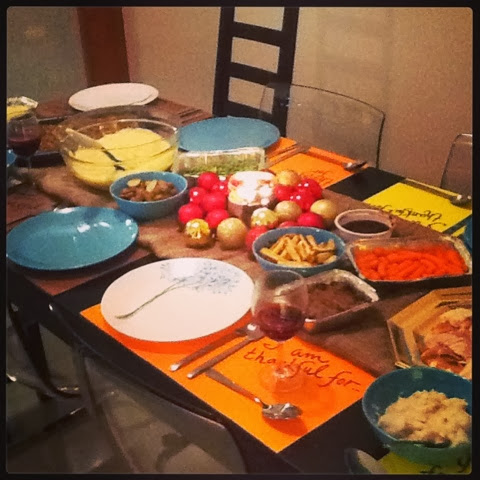 We then headed to Dubai for a few nights, we stayed at the Majestic hotel  in the Bur Dubai area, we had a stunning view of the city. I tried to post a picture, but it doesn't even do the view justice.
We had dinner at Elia a Greek restaurant in the hotel, it was absolutely delicious. I had the moussaka which is like a lasagna with no pasta, just meat (lamb), cheese and eggplant. 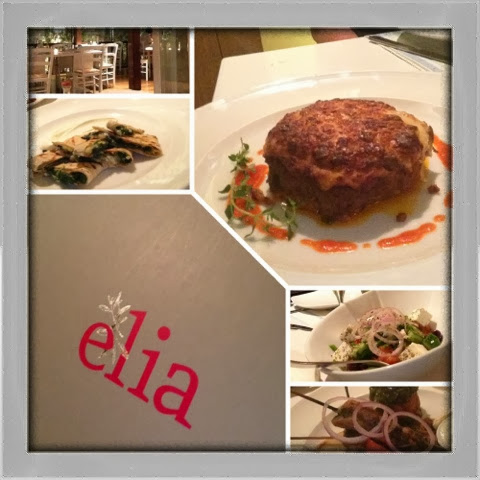 We then headed out to Barasti (which is it's Arab backwards) a club on the beach by the Meridien hotel. 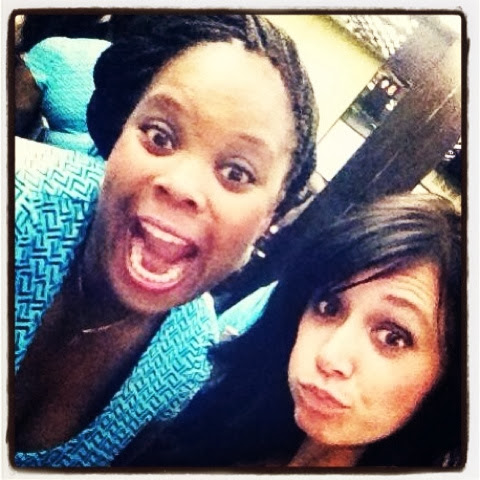 Saturday morning we headed to Dubai mall, there is an iHop there and I had never been. 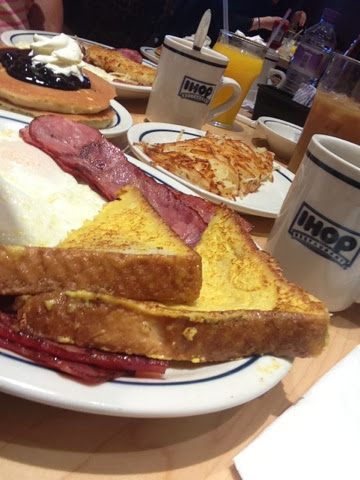 Breakfast was delicious.
I have been to Dubai Mall two or three times already and every time I go I am in awe. 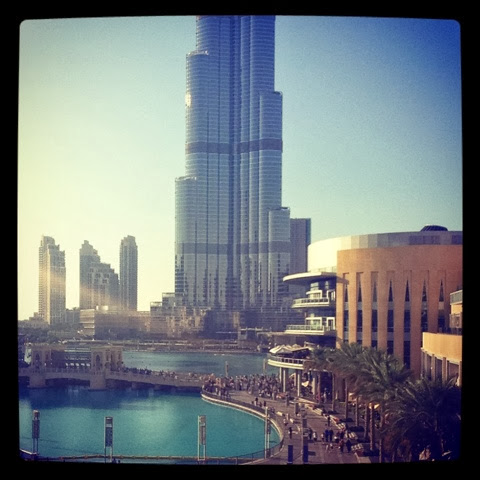 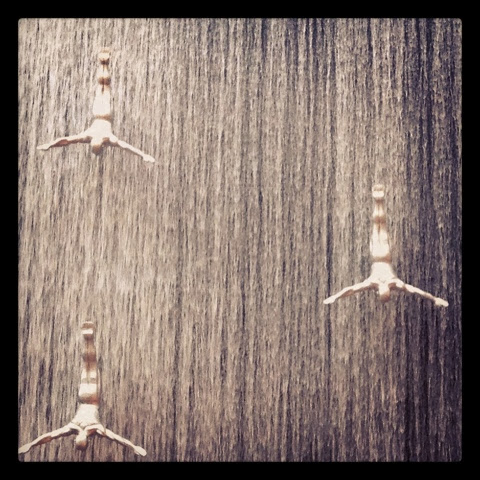 This is a waterfall located in the mall. The silver men are statues that look like the are diving down the waterfall. 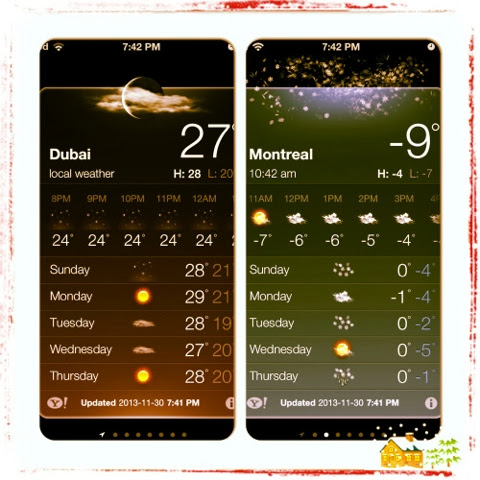 As we approach December the weather here is still holding strong at AMAZING! The morning and evenings are cool, but the days are still super hot.  I do not miss Montreal weather at all. I do not miss snow, cleaning off the car, wearing boot. Some of my friends say they miss the snow and the cooler weather. I on the other hand do not.
Saturday night we headed to 360, a club that is near the Burj Al Arab, the tallest hotel on the world. 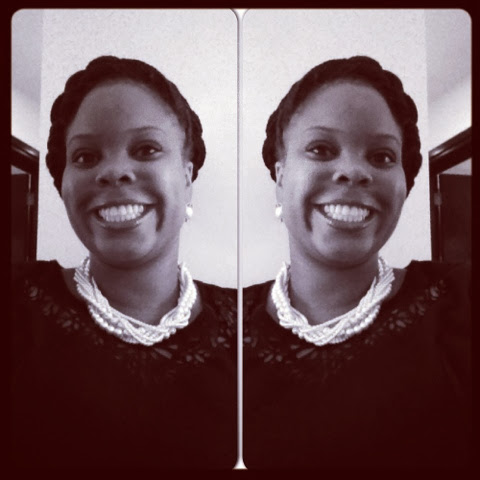 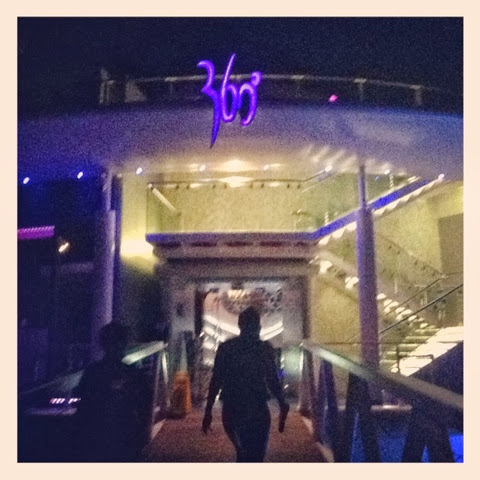 The club is out on the marina and has a 360 view of it. Stunning. 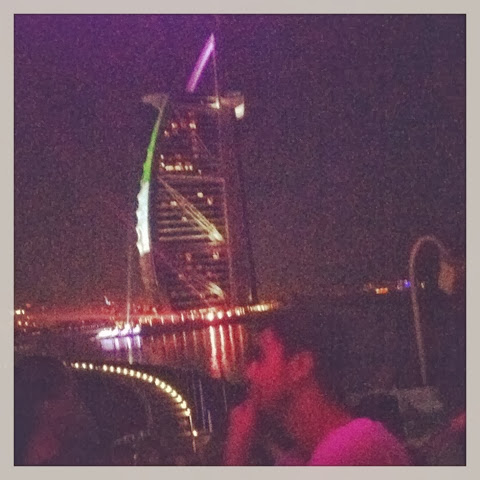 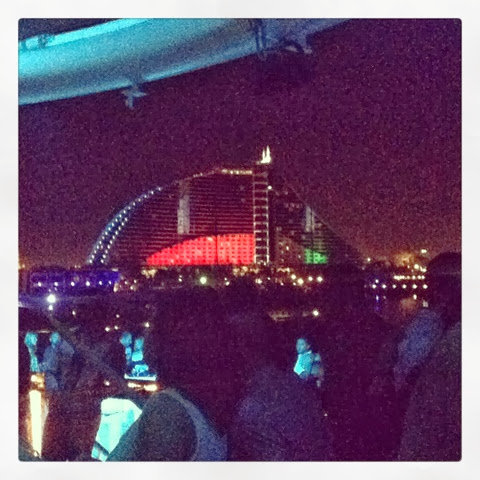 More pics of the view.
Today we are heading to Global Village and then back to Abu Dhabi for a National Day festivities.
Posted by MissHaneefa at 10:58 AM 2 comments: