Taking A Look Back On Hopes and Wishes For Abu Dhabi

I wrote this last year before I left. I wanted to take a look back and see what I have accomplished and what I still need to work on.
Still working on this. I decided to take this year to pay off my school loan as opposed to saving.
I have paid about half of my debt (all of my student loan, hamdullah) I am happy about this.
This year I did go to Chang Mai, North Vietnam, Cambodia, Loas, Oman, Bahrain, Qatar, and Greece. I am impressed with the travel I have done.  I still need to go to Phuket, maybe this Christmas.
Australia, Turkey and Ghana are still on the list as well as backpacking. I think I will do the backpacking when I leave the UAE and take a month in Europe.
No gym in my apartment but I joined one at the hotel, the membership includes a pool.
Too hot to run :(
Ummmm see above.
Started taking lessons but had to stop. Going to try and at least work on my letters.
All in all I am happy with with the goals I have accomplished.
This year:
-travel to Kenya, Phillipines, Japan and Ireland, maybe I can squeeze Turkey in there.
-Pay off the rest of the debt.
-Go on a few more dates.
-I have a big wedding next summer so I am going to focus on dropping some weight. I wanna say 25 pounds to start but 40 would be ideal.
Posted by MissHaneefa at 7:55 PM 2 comments:

On A Living Spree

Have I told you that I love my life. Sometimes I have to stop and take a moment to thank God for how my life has turned out. There are places in the world that I always dreamed about and Greece was one of them. As I head back to Dubai, I still cannot believe I have just spent four days in Greece.
My friend and I spent our time in Athens. We arrived on Friday evening around 5 pm. We had two other Abu Dhabi friends that were staying in Greece als,o so we got together for dinner. 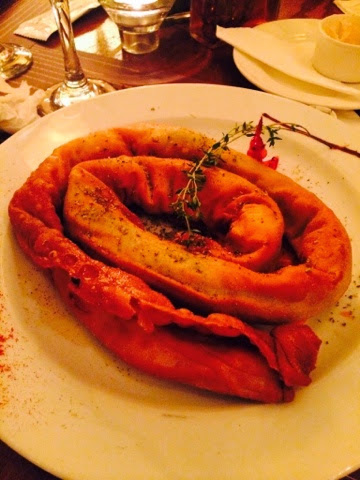 My amazing dinner (I also had a lychee mojito, let me rephrase that I had two lychee mojitos, best drink I have had in a long time)  and this spinach and cheese 'pie' pictured above was the appetizer.
I always ask the waiter for recommendations since I want to eat the best things on the menu. He suggested the grilled chicken with potatoes. 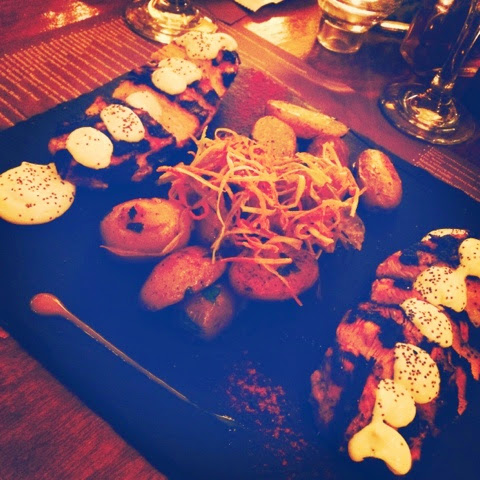 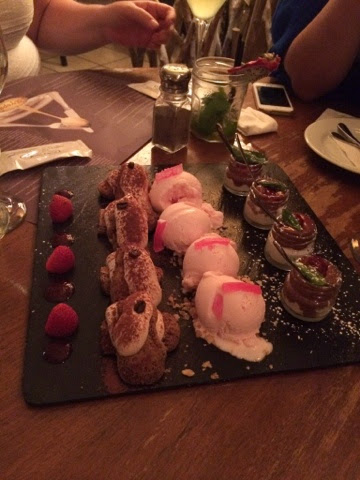 Saturday we took a half day tour of Athens that included the Acropolis. 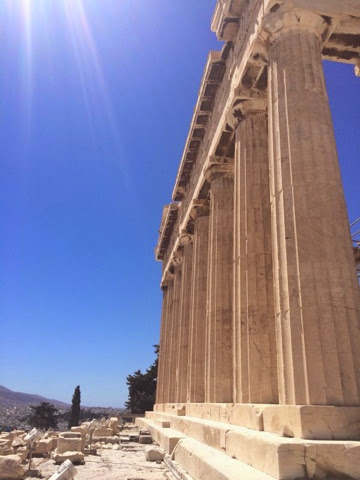 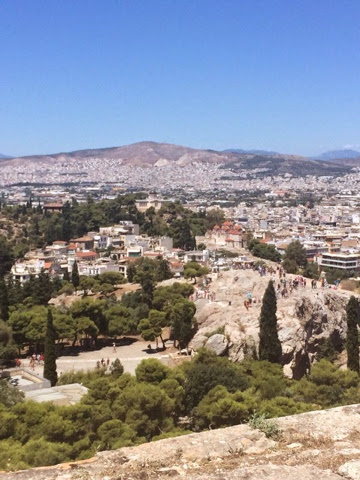 The view from the top.
After the Acropolis we walked around a quaint area called Plaka. There were shops, tree lines streets with restaurants and coffee shops. I miss tree lined streets, you can understand that in the deserts of the UAE there aren't many.
The other thing I am not used to seeing is couples kissing/making out on the streets. I guess this is what they call reverse culture shock. In the UAE there are no public displays of affection allowed. You may see the occasional hand holding but that is it, so you can imagine my surprise when I see couples kissing in public. I kinda missed it.
Sunday we did an island hopping tour. We took a ferry and cruised to three islands: Hydra, Poros and Aegean.
Hydra was my favorite. There are no cars on the island. Only bicycles and donkeys. 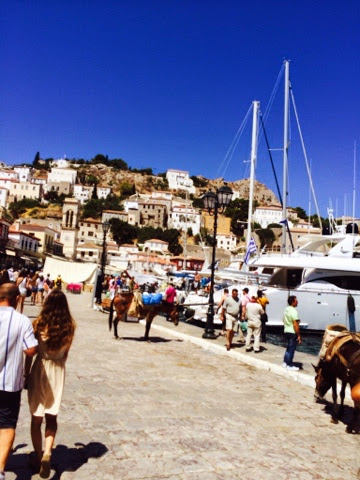 The views on the boat were stunning. 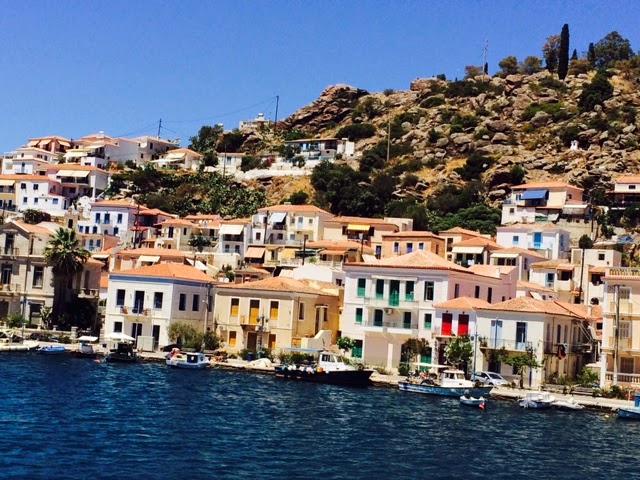 This is the next island Poros.
Finally we went to Agean, we paid for a speed boat trip to another small island to swim. 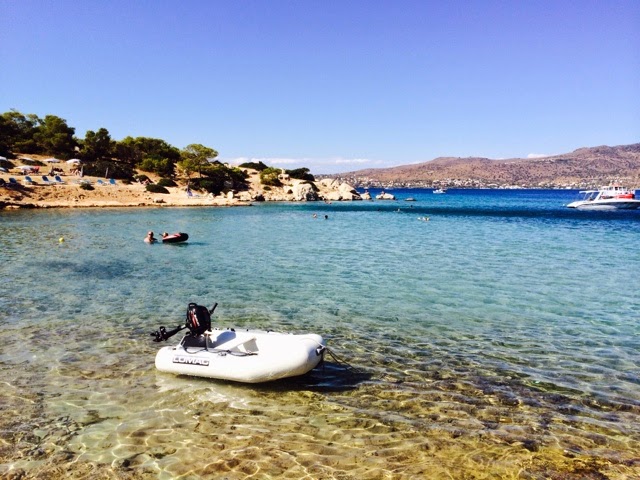 Finally today we went to the Manostaraki area and did a bit more shopping. 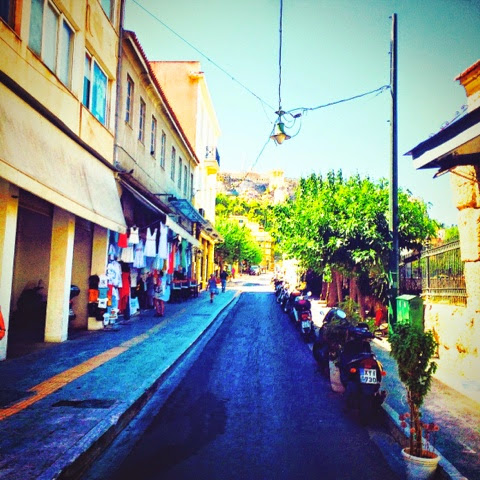 All in all I loved Greece and I have to come back to go to Mykonos and Santorini. The trip was short and super sweet.
Next stop home! Tomorrow night! So excited, haven't seen my family and friends in one year.
P.s we finally got out flight allowance (almost three weeks later than planned) let me just say that I am extremely happy with the amount.
Posted by MissHaneefa at 12:30 PM 2 comments:

Greece!
The school year has finished and before I head home for a month, I am heading to Greece. I will be in Athens for four days. Actually, I am here now!
The view from the plane as we landed: 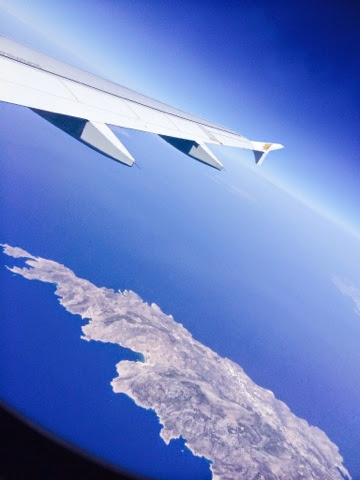 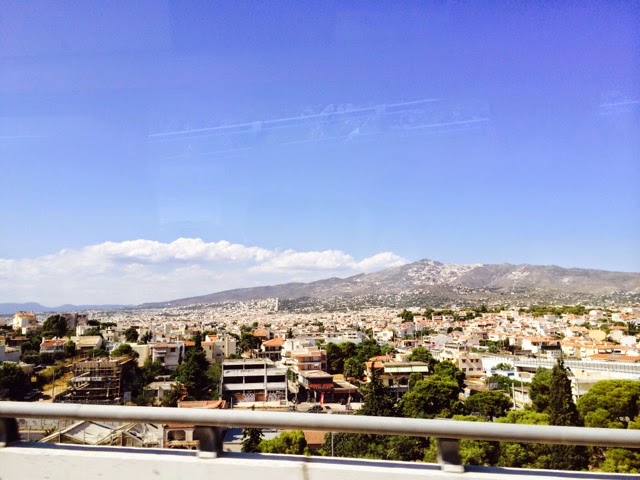 Ramadan in the UAE

Ramadan is the holy month in the Islamic religion.  During this month Muslims do not eat or drink during the day time,each year Ramadan is 10 days earlier than the last year because it goes by the lunar calender.  This year Ramadan started in Sunday June 29.  Muslims with get up before the sun rises and eat, this meal is called suhoor. When the sun sets, the breaking of the fast is called iftar and individuals usually break the fast with their family and friends.  This usually occurs around 7:15 pm here.
Many business have Ramadan hours.  Restaurants such as McDonalds and Starbucks are closed during the day and only open after iftar.  Grocery stores at still open, but once again you cannot eat in public.  Since we are still in school (doing absolutely nothing, by the way) our Ramadan hours are 9 am to 1 pm. Luckily we have been getting out around noon.  If we want to eat or drink, as non Muslims we kind of have to hide since it is extremely disrespectful to eat or drink in front of other Muslims during Ramadan. It is actually illegal to eat and drink in public, this includes your car and you can get a ticket if you are caught by the police. We must also refrain from playing load music in our cars and try and dress modestly (even more modestly than usual).
I have to admit that it feels weird to have to sneak into the bathroom to drink water or have a small snack but I guess that is what you have to do.

Ramadan Kareem to all my Muslim readers!

Posted by MissHaneefa at 11:38 PM No comments: